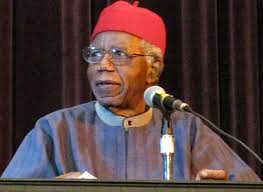 novelist, poet and critic, prof. albert chinualumogu achebe, popularly known as chinua achebe, was born on november 16, 1930, at ogidi, anambra state of nigeria.
he was at cms school, ogidi and government college, umuahia respectively for his primary and secondary education. he excelled in his studies and won for himself a scholarship for an undergraduate programme at the university college, ibadan then an associate college of the university of london. the programme spanned between 1949 and 1953.
after a short teaching stint, he joined the services of the nigerian broadcasting service (nbs) in 1954. in 1959, he was made regional controller, enugu of the organization. and between
1961 and 1966, he held the office of the director, voice of nigeria, lagos.
with the outbreak of the nigerian civil war in 1967, he left the services of the nbs for the academics. he got appointed first as senior research fellow, university of nigeria, nsukka. in 1972, he headed for the united states of america (usa) where he took up appointment as a professor of english at the university of massachusetts, amherst. in 1975, he moved to the university of connecticut, storrs, connecticut, usa.
in 1976, prof achebe came back to nsukka and took up a chair as a professor of english at the university of nigeria. he left the services of the university in 1981. however, in 1985, he was made a professor emeritus by the university.
prof. achebe is best known worldwide as a first-rate novelist. his debut: ‘things fall apart’, that was published in 1958 has been described as the most widely read book in modern african literature. some 8 million copies of the book have been sold around the world, and it has been translated into fifty languages. this has made him the most translated african writer of all time.
generally, prof. achebe’s novels focus on the traditions of lgbo society, the effect of christian influences, and the clash of values during and after the colonial era. his style relies heavily on the igbo oral tradition, and combines straight forward narration with representations of folk stories, proverbs and oratory.
his other works include: no longer at ease (1960); the sacrificial egg and other stories (1962); arrow of god (1964); a man of the people (1966); chike and the river (1966); girls at war (1972); beware soul brothers (1972); how the leopard got his claws (1975); morning yet on creation day (1975); the flute (1978); the drum (1978); the trouble with nigeria (1983); anthills of the savannah (1987); hopes and impediments (1987) and nigerian topics (1987).
in 1990, prof. achebe relocated to the usa after sustaining serious injury in a car crash in nigeria. he thus took up appointment as the david and marianna fisher university professor and professor of africana studies at brown university in providence, rhode island, united states.
prof. achebe was the president, association of nigerian authors (1981 - 1986); editorial adviser/director, heinemann educational books nigeria ltd; director, nwanife publishers, enugu; editorial adviser, african writers’ series, heinemann (1966-1972); chairman, board of the federal radio corporation of nigeria (frcn); january 1988; member, tokyo colloquium (1981); honorary member, american academy of arts and letters (1982) and fellow, royal society of literature, uk.
he was the recipient of the margaret wrong memorial prize (1959); nigerian national trophy award (1960); jock campbel new statesman award (1965); commonwealth poetry prize (1972); the lotus international (afro-asian writers) prize (1975); neill gunn international prize of the scottish arts council (1975); fulbright fellowship award for educational exchange programme (1987-1988).
the highly revered author holds the honorary doctorate degrees of over a dozen universities. this includes university of stirling, scotland, university of southampton, england (1974); university of massachusetts, usa and prince edward island university, usa.
in 1979, prof. achebe bagged two exalted national honours in nigeria. he was first awarded the officer of the order of the federal republic (ofr) and later conferred with the nigerian national order of merit (nnom) by the then head of state, general olusegun obasanjo.